Over the past 30 years, more than 50% of the reefs have disappeared and more than 75% are damaged. Another 40% of the remaining coral could disappear within the next 30 years unless there is a comprehensive conservation overhaul.

With each reef lost, essential food, protection and spawning grounds for marine life disappear and biodiversity declines. With the decline of coral around the world, the marine food chain is under strain and commercial fishing stocks are threatened.

Anuar Abdullah studied oceanography in Florida and began researching ways to regrow coral in the Perhentian Islands in Malaysia in 1981. At first, the 61-year-old Malaysian’s efforts proved futile.

“Locals would come up to me on the beach, attach pieces of coral to the rocks and they would laugh. For twenty years I have observed the behavior and coral life cycles. And at first I failed to grow coral. But looking back, I had to fail multiple times to get through in the end. On earth, we have been planting, growing and growing trees for thousands of years. With coral, we have only recently become aware, for 35 years, of the need to act.”

We worked on reefs destroyed by Typhoon Hayan in the Philippines at the end of 2013, which suffered 99.8% damage. But we still managed to bring back the coral.

“I realized that artificial reefs are a mistake. Adding anything artificial to the reef environment such as metal grilles, PVC or leather piping, does not make sense because these structures eventually collapse and are potentially toxic. They also cost money – making structures and transporting them to the sea, then placing them in the water is not cheap.

Abdullah developed new techniques and methodologies that required no addition of frames to the marine environment. Instead, he used pieces of dead coral to grow new coral.

“In the 1980s, many reefs were suffering, but the decline really accelerated in the 1990s when Southeast Asian economies grew rapidly and mass tourism started to take hold. Back then, companies didn’t think about sustainability and often built above the reefs to expand the available land. Now there is a growing awareness that coral needs to be saved.

By 2010, Abdullah had refined his technique and founded the coral conservation group Ocean Quest. Initially active in Malaysia, the organization quickly began working in Thailand, Indonesia and the Philippines, and began undertaking projects outside Asia in 2017.

“As we are registered as a social enterprise, we are mainly engaged in training. We work with local stakeholders and engage the local community in every coral reef rehabilitation project. In fact, we only work with governments if they come to us and ask us for help. It is much easier to work with stations or associations. Of course, our strategy depends on many factors. Not all reefs are the same. The local climate and the amount of damage caused play a part in how we work. The measure of our success becomes evident through a project’s ability to give back to the community and the environment.

Ocean Quest enters into four-year agreements with stakeholders. The organization then usually builds a coral nursery and trains local people to care for it and help the coral thrive.

“We act directly without delay and work in hectares, acres and square kilometres. Our approach is industrial. We rehabilitate entire reefs. We have developed a simple education system that allows the public to participate in the rehabilitation of coral reefs and we apply this method everywhere we go. We worked on reefs destroyed by Typhoon Haiyan in the Philippines at the end of 2013, which suffered 99.8% damage. But we still managed to bring back the coral. 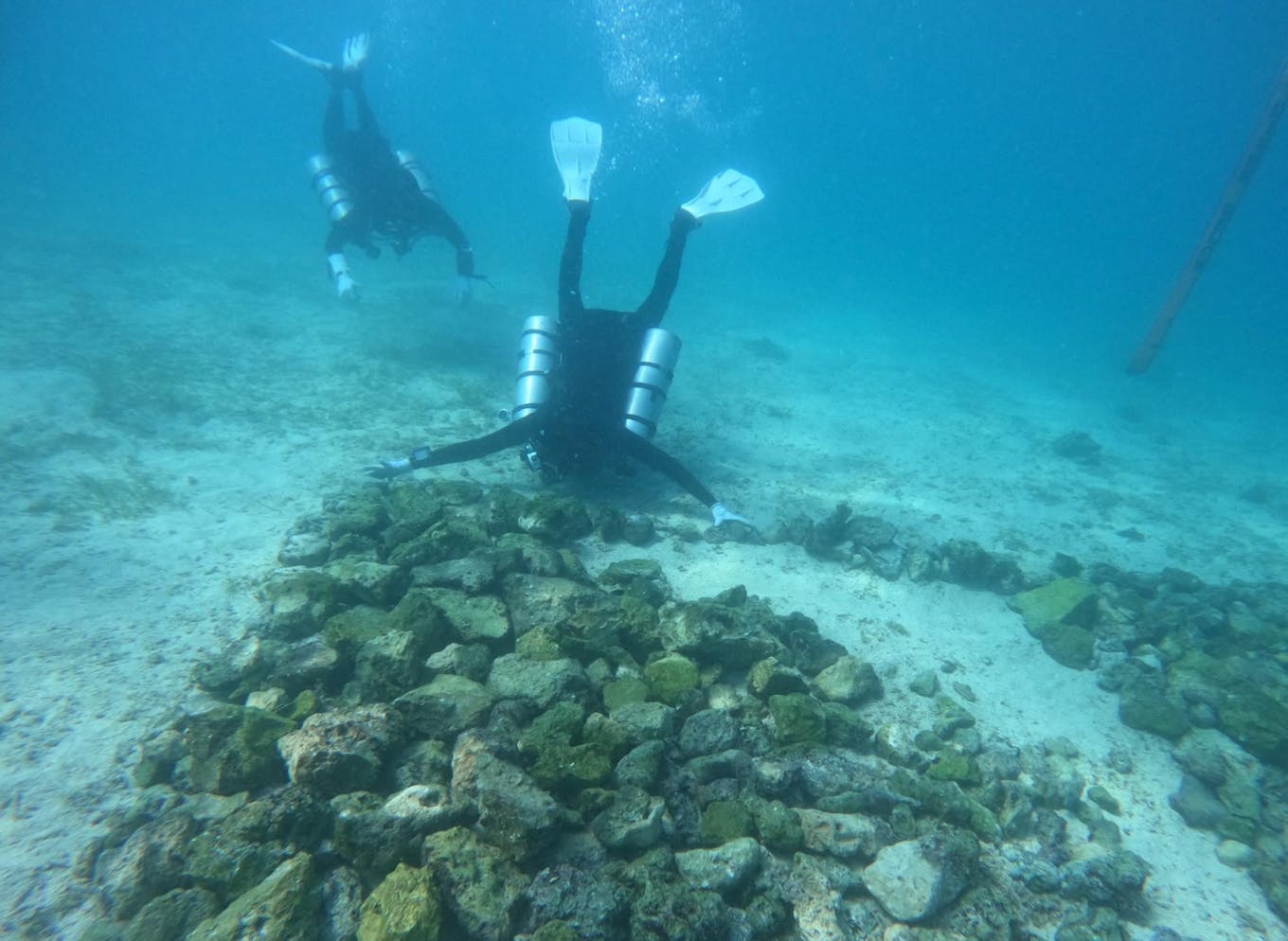 Ocean Quest currently manages 13 projects around Borneo. Off the west coast of the island, on Sepanggar Island, local communities cut down all the seagrass growing along the coast three years ago. It had made the beaches dirty. As a result, runoff from monsoon rains flowed directly into the offshore coral reefs, with the filtering function of the sea grasses lost. The reefs silted up and died.

“There’s no point in regrowing the coral here unless we also reclaim the seagrass. We need to see the big picture, so that we can develop a particular strategy for each situation we encounter. So, we are now engaged in two projects – first regrow seagrass, then regrow coral.

Reefs die for a variety of reasons, all of which are human-caused. On the other side of Borneo, on the island of Mabul, Ocean Quest faced a whole different challenge. The reef here has been overfished by dynamite and poison fishing. 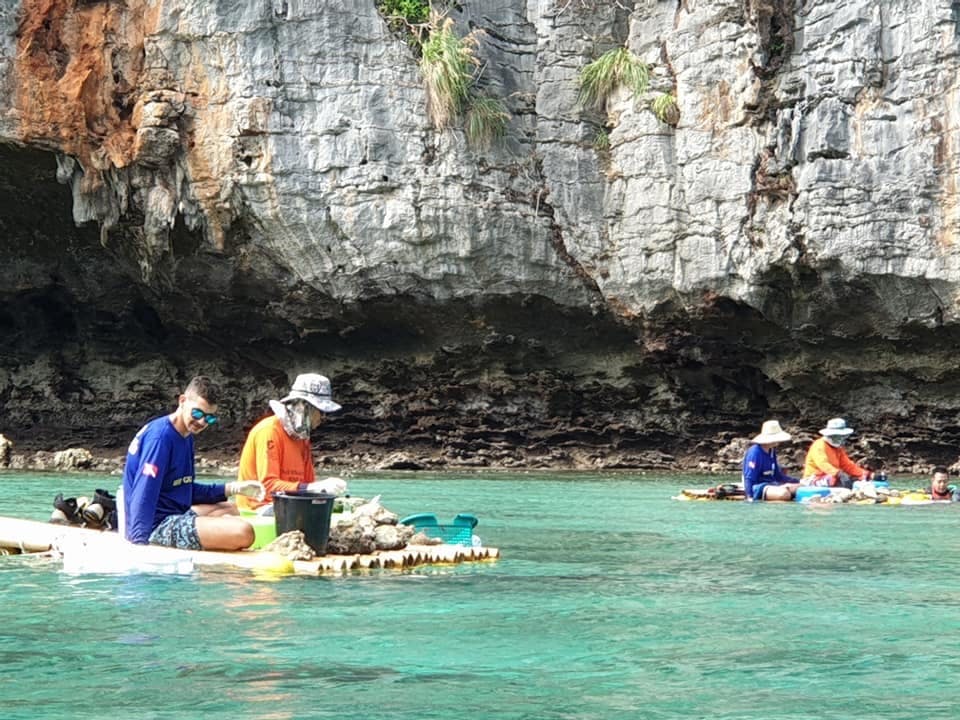 In Thailand, Abdullah initiated the rehabilitation of Maya Bay, famous for having served as the setting for Leonardo DiCaprio’s film The Beach (2000). The Thai government closed Maya Bay in 2018 after decades of mass tourism destroyed coral and alienated resident reef sharks. Abdullah has created a tourism sustainability strategy for the 300 meter long bay. Working with the national park and private stakeholders, Ocean Quest developed a sustainable tourism strategy and initiated coral growth. The bay reopened in the spring of 2022, with restrictions – visitors are no longer aloud to swim, and long-tail boats are not permitted in the bay. But attendance was still too high and Maya Bay is closing again this summer.

“The national park has largely followed our recommendations. But they have to stay the course, if Maya Bay really wants to recover,” Abdullah told Eco-Business.

With big projects underway near the Red Sea resort town of Hurghada in Egypt and French Polynesia, Abdullah spends most of his time on the road. He is particularly eager to travel to the Mergui Archipelago in the Andaman Sea, off the coast of Myanmar. The coral beds here have been devastated by dynamite fishing and a resort island has asked Ocean Quest to look into what can be done to restore the coral in the area.

In November, Ocean Quest will showcase its work at the 2022 United Nations Climate Change Conference (COP27) in Egypt, to convey the urgency of coral conservation to a global audience.

After 40 years of research, failures and successes, Abdullah remains an optimist at heart. “Although much of the ocean paradise is shattered, Ocean Quest has made it its goal to care for and heal it through conservation.