I consider Hadi Rezaei a legend and a friend. I am proud of his accomplishments as a head coach of sitting volleyball and when I was informed that he was traveling to Turkey with his team for a joint camp, participating in a five-team tournament and teaching a training for disabled volleyball coaches in this country, I get so curious.

The ad gave me an excuse to call him for details of his trip. We talked about many things, from joy to sorrow.

Hadi Rezaei: Feeling the joy and emotion of disabled heroes and seeing their tears of enthusiasm during the game and after it is worth a world to me…

I read in the news, coinciding with the Paralympic Games in Tokyo, that two countries were eager to have you as head coach of their national sitting volleyball team. The response of Iranian sports to these two requests was negative.

Hadi Rezaei: I am in the service of the national team of Iran today, which means that I gave a negative answer to these requests.

Hadi Rezaei: (With some annoyance) “Outside of Iran, I’m more respected than Iran.”

This statement is worth pondering.

I said to the master, “Perhaps some people out of jealousy or the pressure of life treated you a little unkindly. Some of them show little kindness and carelessness towards you. If he please do not take such behavior to heart. Your abilities, messages, and contributions to the sport of veterans and disabled people are undeniable. You are in our hearts. Your abilities, positions, and contributions to the sport of veterans and disabled athletes are undeniable. Every time the national disabled volleyball team under your leadership goes to the championship platform, we become filled with joy. Congratulations to you, your colleagues and your students. Many of us have always been with you. You were and are in our hearts! You had and will have the greatest honor and respect always.”

We then discussed his career and upcoming activities in Turkey.

Rahim Rahimzadeh Asl: Introduce yourself and tell us about your volleyball background.

Hadi Rezaei: I was born in the holy city of Mashhad in November 1960. When I was 20, I entered sitting volleyball. Around 15-16 years old, I was captain of the national volleyball team.

After Atlanta, I said goodbye to the world of the game. For a year as a coach, I was alongside Mr. Khalafzadeh. Then I started working as an association manager and association head coach.

I have held various positions within the volleyball association, including head coach, and other positions, both international and non-international. I am an Honorary Life Member of the Paralympic World Championships.

For three years, I was the technical assistant of the Federation of the Disabled in the country. For 14 years, I was responsible for sports for the Council of Disabled and Veterans of the province of Khorasan Razavi. And then the Ministry of Sports appointed me “the sports expert” on the board of directors of the Federation of Veterans and Handicapped, I was a member of the executive office of the Paralympic Games.

Prior to the Tokyo 2020 Olympics, I was appointed Iran’s Chef de Mission. During the Asian Games in Jakarta in 2018, I was also in charge of the Chef de Mission for Iran. I currently hold the position of Vice President of Disabled Volleyball Asia-Oceania. I was secretary general for ten years. Three months ago, I became the vice-president for 4 years with the votes of the member countries. I participated in the Club World Championship as a head coach with club teams.

Hadi Rezaei: I won 6 gold medals as a player in the Paralympic and World Games. After that, I have 4 gold medals and 2 silver in the role of head coach. I have 3 gold medals, 1 silver and 1 bronze at the Paralympic Games and at the World Championships. I participated in 5 world club competitions. In 2003 I won a gold medal in Germany with the Pegah team, and in 2007, 2009, 2011 and 2012 in Egypt I won four gold medals with the Isfahan Zobahan team.

I was also a head coach in all Asian championships. When I was a player, there was no Asian Championship at all. For three years from 2010 to 2013 within the World Paralympic Board, I was in charge of development.

After returning from the 2020 Tokyo Olympics, I announced that I would no longer be working due to extreme fatigue. Later, depending on the discussions that took place. I came back about three months ago. So far, I have organized two camps for the national team.

My medals as a coach at the seated world championships… 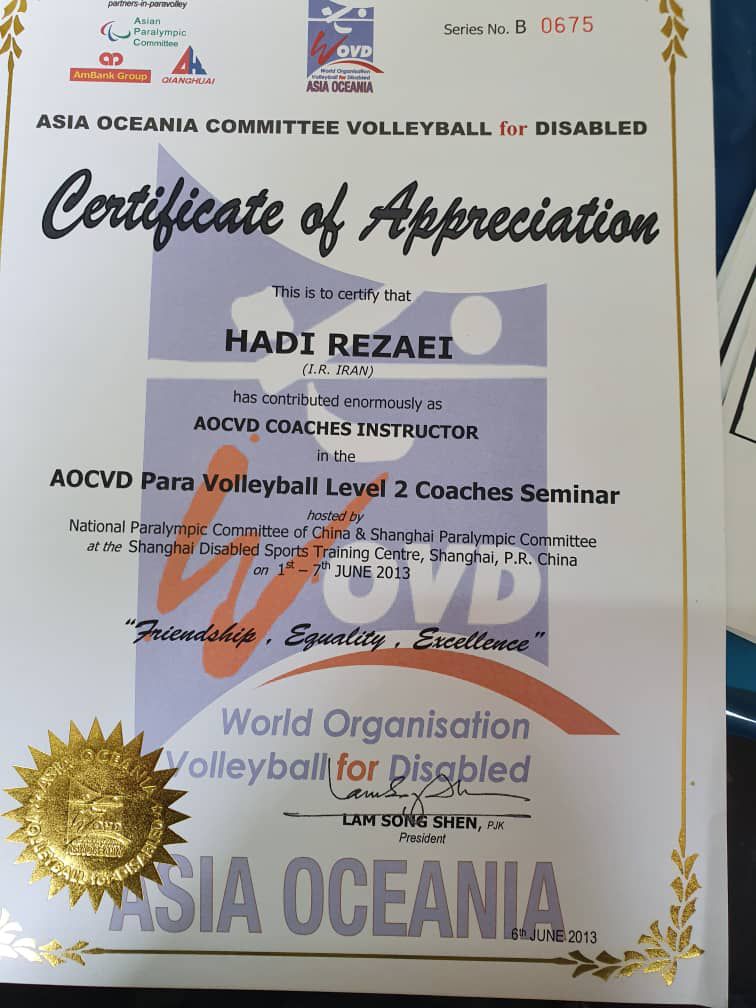 After hearing Coach Rezaei’s number of medals and positions, both nationally and internationally, I congratulated him and added that with all these medals and positions, you are truly a legend. He laughed and said, “I’ve said once that success is not based on individual performance alone, but depends on the collective effort of all team members, including the players, the coach- manager and technical staff.”

Rahim Rahimzadeh Asl: According to the program agreed with the Turkish Volleyball Federation, it has been agreed that the national sitting volleyball team of the Islamic Republic of Iran will travel to Turkey for 8 days to organize a joint 5-day camp with the national team. Turkish in the town of Tunceli.

Hadi Rezaei: Due to the fact that a fellow Iranian (Mr. Zandi) has become the head coach of the national sitting volleyball team of Turkey, in the interval between the joint camp and the tournament, there will be a Turkish Sitting Volleyball Coaching Training Course, I have been appointed as an instructor for this course,

I will do my best to pass on to the coaches the knowledge that I have acquired during the years of cooperation with Iranian sitting volleyball in various competitions, including the world championship, Paralympic Games, youth team and matches of club.

Rahim Rahimzadeh Asl: I sincerely thank you for your explanation.